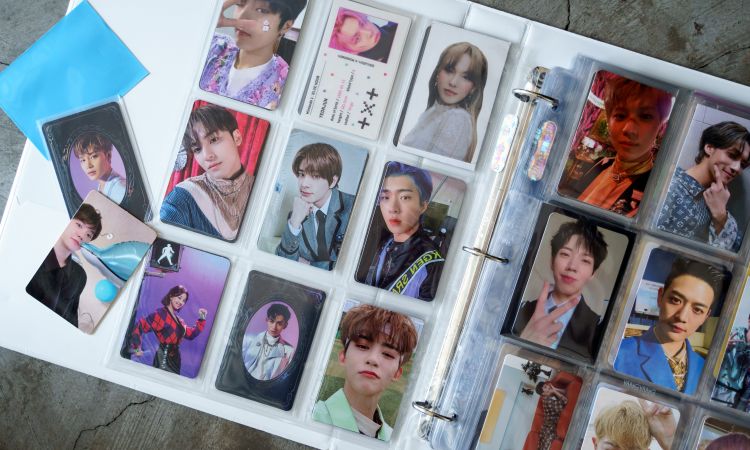 If you’ve been friends with a K-pop fan, you’ve probably seen them with something very similar to a Pokémon card collection. Instead of cards of animal-like creatures with powers, they collect cards of members from their favorite K-pop groups. These cards are known as photocards, and almost every fan loves them (including myself, it’s a guilty pleasure of mine). Fans grow a connection to them and do all they can to collect their desired cards – either by buying the albums they come from or purchasing individual cards from online sellers.

Every time a K-pop group or idol releases a new album, there’s a good chance they’ll sell physical copies of the album. These albums roughly always contain a physical CD, a photobook with pictures of the artist/group members, extra goodies, and the star of the show today: photocards.

Essentially, photocards are exactly what they sound like. They’re collectible cards of either selfies or photos of idols that aren’t released online.

The first group to introduce photocards was Girls’ Generation. They would only include a single card per album. With that, you’d only know which photocard you receive after you open it. It was all a marketing strategy: buyers would purchase more albums in hopes they can “pull” a card of their favorite member.

Over time, more companies adopted this practice. Now, Fans all over the world are obsessed with obtaining and collecting as many photocards as they can. Of course, proper protection is required so the cards do not get damaged – which is why fans buy photo albums to store them in.

As you can imagine, it costs quite a bit to maintain the desired collection. Considering the price ranges for individual cards vary from $3 – $300, you can imagine how much money fans spend on their collection. Despite their varying prices, why do fans still collect these cards?

Why Are Fans Willing to Collect Photocards?

It’s hard to understand the craze behind these photos of idols’ faces, yet photocards are prized possessions in the K-pop community. In order to grasp this idea better, I interviewed two of my collector friends for their opinions.

“I collect photocards mostly for the fun of it, and also because it gives me a sort of challenge.”

My friend, Mikey, shared with me that they enjoyed collecting photocards because it supplies them with “a task to complete.” All album concepts come with a number of photocards that one can collect, and fans create lists of all possible pulls. For Mikey, it’s incredibly satisfying to check each photocard they collect off a list.

Not to mention, they also think they’re “super cute to show off with your collection of merch!” They also enjoy looking at their photocard album from time to time, since it’s enjoyable to “have something physical!”

Mikey offers another viewpoint as well: “I also think the trading aspect of collecting photocards is fun — if you’re unable to “pull” your bias from an album you’ve bought, you can always trade for the one you want with friends or fellow K-pop fans on the internet.”

“It’s a very fun experience buying a K-pop album and getting excited to see which member of the group you pulled.”

My next friend, Naomi, shares that she loves the excitement of seeing which member’s card she receives. What’s even better is that she can display her photocards on the back of her phone case or on card top loaders, which can be decorated with stickers.

Along with that, she finds even more fun in collecting when she can trade photocards with her friends. “If you pull each other’s favorite member, you can easily trade with one another.”

Like Mikey, she finds joy in using the photocards as a way to connect with her friends. Not only does she enjoy collecting her favorite members, but she can interact with her friends and even make new ones with her displays. In fact, she told me how she made new friends this school year because of her displayed cards. Like her, they’re avid collectors and always provide her with a fun conversation at school about K-pop.

Collecting photocards provide fans with comfort and happiness, a task, and the ability to connect with other people and trade with them. Even though these cards don’t provide a game to play like Pokémon cards, they still bring people happiness and opportunities to connect with friends.

To fans, photocards aren’t simply just pieces of paper with their idols’ faces on them; they’re a fun collection that bring happiness, even if it might be a bit costly to maintain.

Marie Calzada is a writer for The Caduceus Times as a junior at MAST @ Homestead. She primarily focuses on feature writing since it’s a way she can share her interests in certain topics with her peers at school. Additionally, she also dabbles in other topics which represent her vast range of interests. She is a Virgo born on September 16th, 2004. Her love for the color pink and cute things is contrasted by her love for dark clothing, horror media, and true crime documentaries.