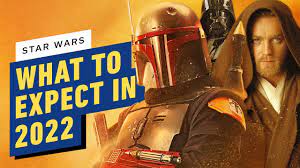 The year 2022 is set to be the biggest year for Star Wars on Disney Plus with several highly anticipated shows scheduled for release. Here is our rundown and predictions on these upcoming shows and what you should know/expect.

The Book of Boba Fett Series

This series will explore the revival of everyone’s favorite original trilogy bounty hunter. In the post-credit scenes of the latest season in “The Mandalorian”, we see Boba Fett and his partner Fennec Shand eliminate Bib Fortuna and assume control of Jabba’s criminal empire. Fans should expect major flashbacks throughout this series to explain how he survived his fall into the Sarlacc Pit during “Return of the Jedi” and what he was doing on Tatooine for the subsequent years that followed the fall of the Empire. We look forward to Lucasfilm really developing Boba Fett into a more dynamic character as he confronts the various challenges in maintaining/growing his criminal empire. On our wishlist for this series, we can hope for the return of infamous bounty hunters such as Bossk or Cad Bane to serve as an ally or enemy throughout the series. It’s also likely that we will see a new or established criminal syndicate like Crimson Dawn be the main challenger to Boba Fett in this series.

The animated series that served as a sequel to the impressive animated “Clone Wars” series had mixed reviews from the fandom last year. We last left the Bad Batch in season 1 fleeing Kamino as the Empire destroyed the Kaminoan cloning facility on the planet. Star Wars fans should expect a larger role for Omega as we learned that she was a genetically modified female Jango Fett clone who is force sensitive. We should also expect that Nala Se’s cloning research will offer a greater explanation/connection to the Empire’s interest in cloning force-sensitive beings which we have seen in “The Mandalorian” Season 1+2 and the Sequel trilogy. For this wishlist, we hope to see Crosshair fulfill his redemption arc and return to his brothers and Omega as the series continues to balance between the virtues of honor and duty.

This series will provide Star Wars fans a greater background story to the character of Cassian Andor who was introduced to us in “Rogue One”. We know this series is set some five years before the events of “Rogue One” when the rebellion was still in its earliest stages of formation. I’d expect to see or hear of characters that were introduced to us in the animated series of “Star Wars Rebels” to make a live-action debut such as Kanan, Hera, Zeb, Chopper, or Sabine as they would perfectly fit in with the time period of this show. More likely, we will see the return of characters like Senator Bail Organa of Alderaan and Saw Gerrea organizing the resistance to the Empire with agents such as Cassian Andor gathering information/support for the formation of the Rebel Alliance.

Arguably the most anticipated live-action Star Wars series will see the return of Ewan McGregor as Obi-Wan Kenobi and Hayden Christensen as Darth Vader. This series is set between the events of “Revenge of the Sith” and “A New Hope” and it will explain what the self-exiled Jedi Master was doing for many years on Tatooine while Luke Skywalker was being raised on a moisture farm by his aunt and uncle. It was already confirmed by Lucasfilm that Obi-Wan will have a rematch with Darth Vader in this series. The expectation of some fans is that the Empire will deploy Sith Inquisitors across the galaxy to purge the surviving Jedi of Order 66 and this will cause for Obi-Wan to reveal himself to Darth Vader in one last stand-off before “A New Hope”. On our wishlist for this series, we hope to see the return of Qui-Gon Jinn to guide Obi-Wan in his continued training that Yoda intended for him to complete at the conclusion of “Revenge of the Sith”. As Obi-Wan’s former master, Qui-Gon is the perfect teacher to help Obi-Wan learn more about the force and how to become a force ghost.

With these and many other upcoming projects for 2023 and beyond… the future of Star Wars on Disney Plus is really bright!! Which project are you most excited for?