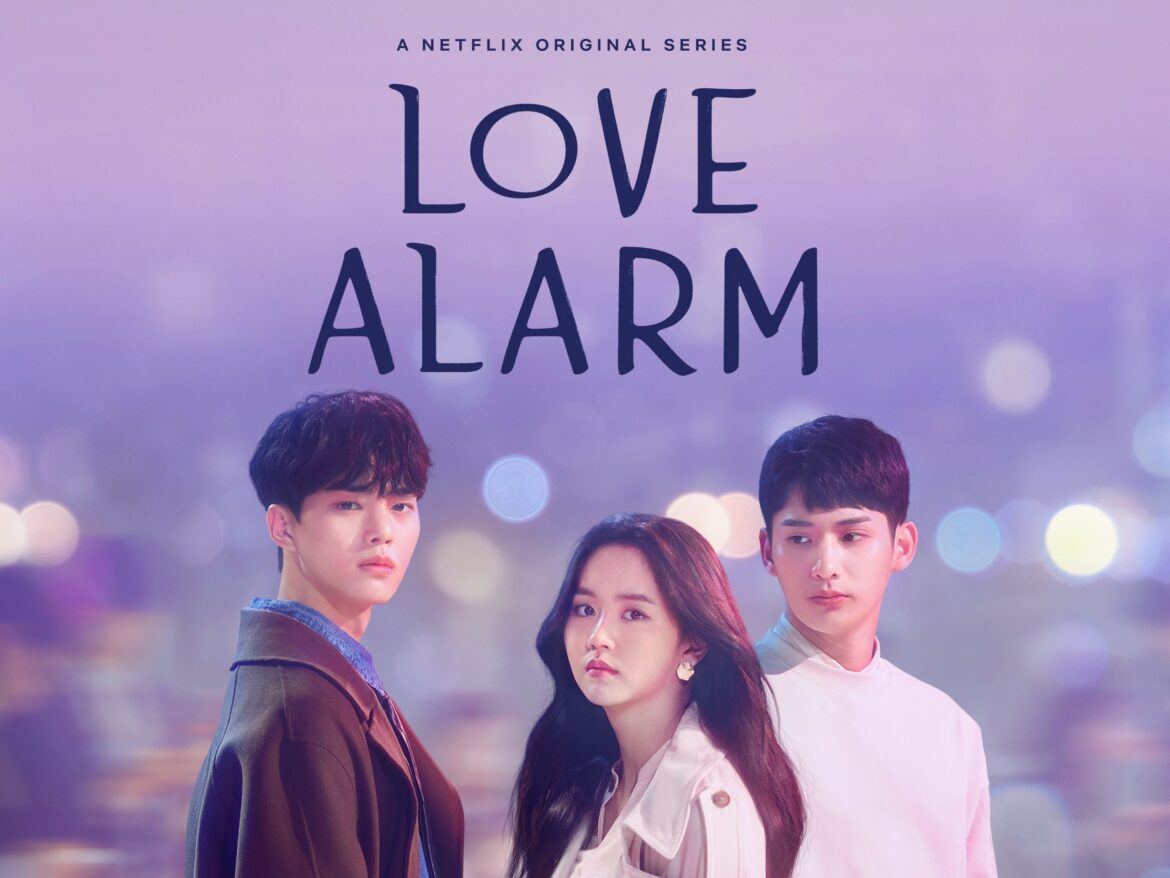 Imagine having an app on your phone that detects a person who loves you within a 10-meter radius. Seems cool and innovative right? Well, Netflix’s Korean drama “Love Alarm” is solely based on that. The genre of the Webtoon originated show, which was written by Chon Kye-Young, is romance, drama, and science fiction. The director of the show was Lee Na-Jeong starring Kim So-Hyun who plays the female lead Jo-Jo, Hwang Sun-oh played by Song Kang, and Lee Hye-Yeong played by Jung Garam. Released on August 22, 2019, this series successfully became one of the most popular, approved, and admired Korean Dramas’ watched on Netflix. This is also a big accomplishment since it is Netflix’s first original South Korean show. It has a high number of 81% on rotten tomatoes and a 98% of viewer likeness.

In the show, we get a lead female high school named Jo-Jo who is hardworking, intelligent, and somewhat popular. She is in the middle of a love triangle while trying to cope with her very traumatic and depressing personal family issues. This allows the show to touch upon societal family issues, suicide, and more deep concepts on emotions. This is really important especially for teenagers because we should bring awareness to these serious issues that many teens face. This will also show them that they are not alone and that others go through the same problems.

Despite the emotional scarring Jo-Jo faces from her parents who committed suicide when she was just a child, she continues to persevere. The guys that make up the tringle are Hwang Sun-Oh and Lee Hye-Yeong who are best friends and attend her school. Sun-Oh is a rich model with a family history of a politician father and mother who’s both in business. The mother and father were very neglectful towards him his entire childhood, especially his mother. She even tried to intoxicate him with a drink when Sun-ho was very young because she thought he was so annoying. Thankfully Hye-Yeong, who grew up in the same house as him, since his mother was a house maid for Sun-Ho’s family, came to the rescue and pushed the drink out of his hand. Ever since then Sun-Ho and Hye-Yeong became best friends.

The app Love Alarm was launched around their freshman year in high school. Furthermore, all the popularity it has gained in their school among the students additionally came along with chaos. Not only did this cause tension between which best friend can confess their love first to Jo-Jo but also with people ending their lives at the cost of the app because supposedly since their love alarm never rings that means they are not capable of being loved by anyone making it dark, sad and even becoming a rank of status in their society by how many rings a person gets. This also reflects onto our world to where many people seem to commit suicide because of the lack of love they feel is given to them. This is a reminder that every day we should strive to show love and kindness to everyone we meet.

This was my first ever Korean drama that I watched as a beginner and I ended up liking it. However, it may seem boring or not really make sense in the first episodes but it gets surprisingly compelling very quickly. So, if you’re someone who’s a beginner to k-dramas and wants to watch something that’s romantic but not too cliché and still has some serious topics, I would recommend this for you. It’s a story full of thoughts on what it means to truly be in love.

This writer is a person passionate towards the study of medicine. She is a wise and intelligent person who has been in the honor roll for her three years of middle school. She has won a trophy and a medal in elementary school for her kindness, liability, and intelligence. With these successful and interesting attributes she decides to dive deep into the job as a full time Newspaper writer for her Highschool.